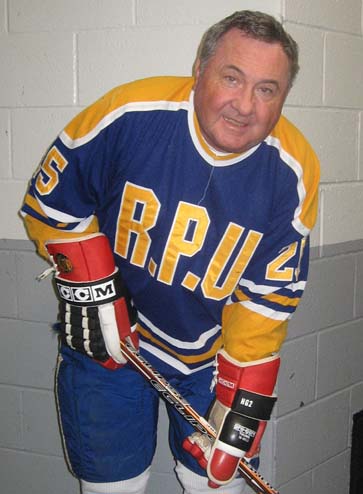 Don DesJardine at
RRHA Game in 2008

The Ryerson Rams Hockey Alumni (RRHA) and the current Ryerson Rams hockey team have lost one of the program’s strongest supporters.

After a long courageous battle with cancer, Don DesJardine passed away peacefully on May 26, 2016 in a palliative care facility in Owen Sound. His long-time companion, Marion Kelly, and his sons Jeff and Martin were by his side.

Don was a member of the 1962-63 Ryerson Rams hockey team that won the Ontario Intercollegiate Athletic Association (OIAA) championship and he was inducted into the Ryerson Sports Hall Of Fame with the rest of his team mates for doing so.

He was a key member of the RRHA Executive, was the brain child behind the “$20 A Year Club” and contributed significantly to the “RAMFIND Project”.

In 2015, Don made a record donation to Ryerson Rams Hockey in the form of an annual bursary … read more here.

This man bled Ryerson Blue and attended many RRHA golf tournaments, RRHA hockey games, Rams hockey games, Alumni Week events and many RRHA brain storming sessions. He will be dearly missed by his team mates, the RRHA and his entire Ramily.

At Don’s request, he has already been cremated and there will be no funeral service.

The celebration of life for Don will be held:

(Also, please don’t worry if you can’t attend, I know that your thoughts and prayers are with me and Don’s sons, Jeff & Martin, at this difficult time.)

Once a Ram, always a Ram