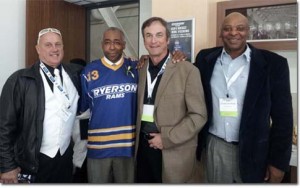 On October 5, 2013, Ryerson Rams Hockey Alumnus, John Saunders. was inducted into the Ryerson Sports Hall Of Fame. John played for the Rams in 1976-77 and 1977-78.  John was named an OUAA First Team All-Star and was an Assistant Captain of the team in his second year.  During the two years John played for the Rams, they recorded their two best team winning percentages in team history since graduating to the university league.  In his rookie season the team won the OUAA Central Division Championship. That season, the Rams never lost a home game.

After graduating from Ryerson, Saunders made his mark in the world of broadcasting. One of the most accomplished studio anchors in sports television, he has received critical acclaim for his work in the studio for both ABC Sports and ESPN.

Want to join the discussion?
Feel free to contribute!