On Wednesday, August 10, 2016 we received the very shocking news that another RRHA brother has left us. Our teammate, colleague and friend, John Saunders, was found non-responsive at around 4am that morning.

While trying to keep this brief, I can’t even begin to tell you about John’s life accomplishments. You can search the internet and read about him all day long, which is strongly recommended.

As far as the RRHA organization goes, coming off of a hockey scholarship at Western Michigan University, John transferred to Ryerson and played defense for the Rams for 2 years, 1976-77 & 1977-78. He broke his ankle in his last game as a Ram and used that down time to submit résumés, one of which landed him a job as News Director in the Espanola radio station where he also did play-by-play for the local Jr. hockey team. The rest is well documented history … New Brunswick, Toronto, Baltimore, Connecticut.

John was an OUAA All Star in his rookie year and was inducted into the Ryerson Sports Hall Of Fame in 2013. In 2014 John was awarded a Ryerson Alumni Achievement Award (AAA) for his life accomplishments. The AAA is a very prestigious award and his plaque is in some very impressive company on a wall in the Engineering & Computing Centre on campus. 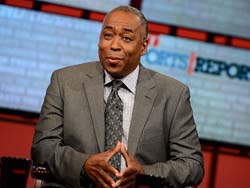 Regardless of his accomplishments in life, John never forgot us and where he came from. At the RRHA golf tournament in June, he informed our foursome that he was leaving his set of golf clubs up here so he could come up more often to play golf with us. At the snap of his fingers, John could attend pretty much any sporting event on the planet but he would still fly in to meet his old teammates to catch a Ryerson Rams hockey game or to attend the RRHA golf tournament.

Our thoughts and prayers go out to John’s wife Wanda, his daughters Aleah and Jenna, his brother Bernie and his many other friends and colleagues who will miss him dearly, as will we.

A few of John’s teammates get together to pay homage to “The Colonel” and reminisce about hockey life at Ryerson. 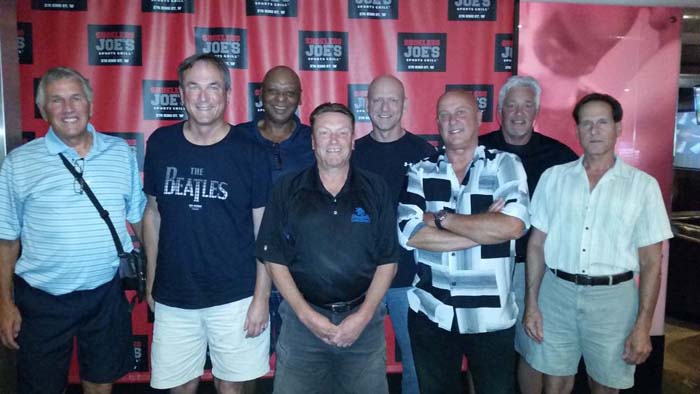 Ten months after John’s passing, 14 of his team mates attend the RRHA Golf Tournament and sport commemorative ball caps with an embroidered #4 on the side. 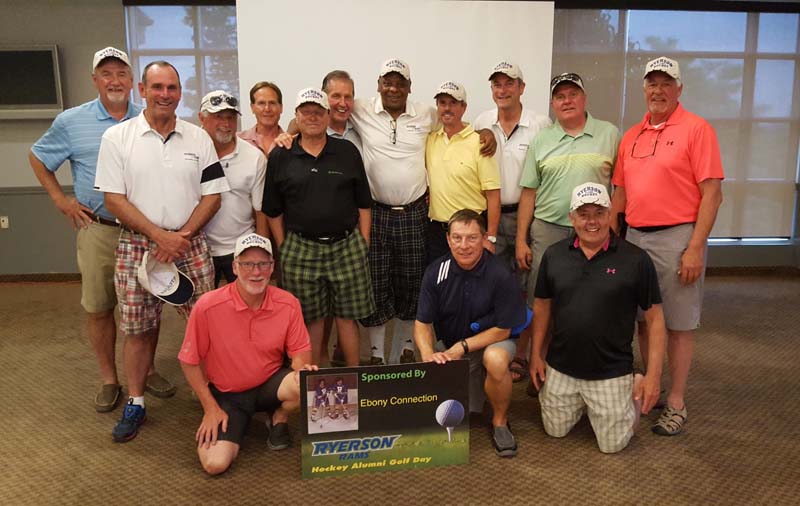