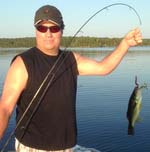 Our beloved son, brother, nephew, uncle and friend passed suddenly but peacefully in his sleep on Thursday August 13, 2015. Paul was an enthusiastic and skilled cook, an avid and patient angler, an eager and talented athlete, but most of all Paul was a loyal and loving family man. He was the best uncle in the world to Will, Caroline, Katie, Libby, Ella, and Thomas.

He was also a fierce Boston Bruins hockey fan, to the chagrin and frequent frustration of his older brother Michael. In fact hockey was Paul’s passion, inherited from his father John, and he proudly skated for the University of Windsor, Sheridan College, and Ryerson University before injuries took their toll on his game. He stayed close to the sport he loved by refereeing Burlington Hockey.

Fishing off the dock at sister Anne’s cottage was one of Paul’s favourite ways to spend the day, and his whole family reaped the rewards. Paul would fish for hours, catching and filleting enough bass and trout to feed everyone – even though Paul never touched fish! It was but one example of Paul’s kind and generous nature. Staying in touch and close to all the members of his family and those he loved was Paul’s true calling. Brother, sister, cousins, aunts, uncles, nephews, nieces, brothers-and-sisters in-law and close friends could all count on at least a weekly phone call from ‘Kosy’. For Nana Liz and Papa John the calls were daily, and even twice daily. Just to catch up, say hi, talk about the big stuff, or the small stuff. Staying connected was, for Paul, the most important part. And let that be Paul’s legacy – a renewed pledge by all of us to do what he did so well – stay connected. ~~ by Smiths Funeral Home ~~