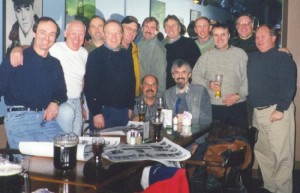 RONALD ALAN WATSON Suddenly in Clermont, Florida, on March 3, 2015 in his 67th year. Beloved husband of Susan (nee Paulikot). Proud father of Ryan, Kate (Rob) and the late Jamie. Super cool grandpa to Nathan and Gabrielle. Loving son of the late Harry and Lillian (nee Thomson). Brother to his best friend Dale and the late Barry. Loved by his many brothers and sisters-in-law, nieces, nephews and friends.

Ron is on the right end in the back row of this photo that was taken after the RRHA Alumni Hockey Game in 2000. It was the 30 Year Reunion of this 1970 team.